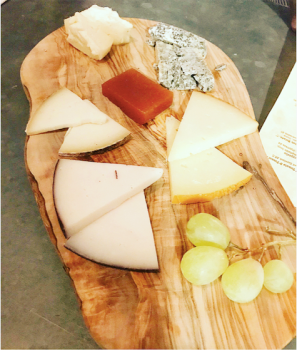 Our first review of 2018 finds us in Rambla, a Catalonian restaurant named after Barcelona’s most famous boulevard. Rambla is buried in heart of Soho, and our seat in front of an enormous window makes us spectators onto a slightly less illustrious thoroughfare, Dean Street.

The pane of glass is so large, and the table so close to it, that as night falls and crowds gather, you almost feel immersed in nocturnal Soho, with all its noise, colour and oddness, which is a mixed blessing, but great for veteran people watchers, or those struggling for conversation at the table.

Inside, the restaurant is equally lively, waiters, waitresses and chefs calling out to one another across the open kitchen, and new diners stumbling in with hungry anticipation written across their faces.

Is this anticipation deserved? The food is certainly nice here. A plate of ham is perfect, marbled with just the right amount of fat, its texture oiled and rich, each strip curled temptingly on a wooden board. A bowl of blistered padron peppers – which my partner in culinary crime won’t lay a finger on – are wizened, salted and wonderfully bitter. A pair of pan con tomate, the bread gently toasted, the tomato almost made into a paste, suffused with a subtle olive oil, shards of salt scattered carelessly across the top, is good. 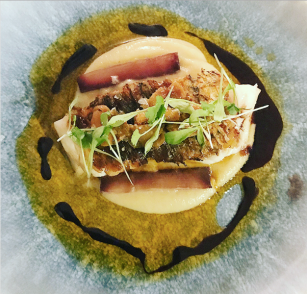 But I was left with a feeling of slight disappointment. Some of the reviews I had read of this restaurant over the previous month or two spoke of it with the reverence and awe normally reserved for places of worship or Unesco-approved world heritage sites. Critics described the dishes served at Rambla as stunning, as things of beauty, food worth clogging an artery for. I did not feel quite like that.

Four small wheels of cured salmon were so salty that even my partner in culinary crime, no stranger to smothering a dish in condiments, had to take several water breaks to get through them. Some lamb chops with rosemary aioli were a little washed out, the meat lacking that vibrancy of flavour. Some seabass with Jerusalem artichoke was good, but it didn’t have me scraping the plate to ensure I removed every last morsel.

Perhaps my expectations were too high. Perhaps Rambla had been projected too far into the stratosphere by frenzied restaurant critics for me to leave without a tinge of disappointment. If I juxtapose Rambla with Barafina, it falls short. I would probably place it half a rung below Ember Yard as well.

The restaurant also did not help itself by having a number of waitresses whose English language skills were so minimal that they struggled to function on the floor of a restaurant. No one is asking that restaurants staff themselves exclusively with English literature graduates from Cambridge, but if a waiter can’t understand the phrases “please can I have a gin and tonic?”, “one more of these please,” or “bring me the bill!” then we have a slight problem.

I will go back to Rambla. A place so well-regarded deserves a shot at redemption. It is also great value for money. But for now, I am not ready to sing its praises, even drunkenly on a street in Soho.