Probably the best restaurant in the City, St John Bread and Wine is based on Commercial Street, a stone’s throw from Liverpool Street Station, in the shadow of Christ Church, Spitalfields. It is an offshoot of St. John restaurant in Smithfield, Farringdon, which was opened by Fergus Henderson in 1994, the eccentric looking chef with no formal training but a positive genius for taking neglected cuts of meat that people would normally run from in horror (think offal, or worse), and turning them into mouth-wateringly delectable dishes.

St. John became a smash hit, nose to tail eating a culinary phenomenon, and Fergus Henderson a celebrity chef. In 2003, he opened his second restaurant, St. John Bread and Wine, which is where we found ourselves on Friday night.

St John Bread and Wine is a safe place to discover food. Its menu, changing and shuffling on a daily basis, is a treasure trove of surprises, rarities and oddities, along with the odd established classic. And because everything is always so fantastically cooked and flawlessly thought-out, closing your eyes and ordering bone marrow, or a serving of pig’s trotters, doesn’t really feel like such a risk. There is a sense of trust between diner and chef: if anyone can do it well, then St John Bread and Wine will do it well. 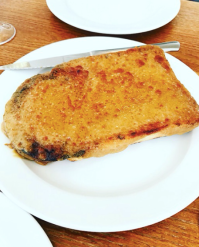 Having said all of the above, we weren’t remotely adventurous in our selection of dishes on Friday. We started off with a Welsh Rarebit, which I thought I’d never eaten before, only because I’d forgotten it was simply cheese on toast. However, true to form, St John Bread and Wine contrived to make the most childish of all dishes an excellent warm-up act: the cheese was loosened with milk and was a bubbling, golden colour, laid out on top of soft, absorbent bread an inch thick. A dash of Lea & Perrins Worcestershire sauce gave the cheese a little sharpness.

Next up was perhaps the nicest pork terrine I have ever had in my life. It had an earthy, deep flavour to it, layered and subtle, and on at least a dozen separate occasions in the 24-hours since sitting eating the last forkful I have found myself day-dreaming of it, which is becoming a little worrying. A fresh tomato salad complemented it well.

A plate of cheeses ran the gamut of the farm, with goats, sheep and cow cheese, accompanied by quince and a stack of little oat cakes. Finally, we ordered venison, which came on a bed of white cabbage studded with little pieces of fried bacon. The venison was soft and succulent, the heart of each chunk almost as red as a strawberry.

My partner in culinary crime then ordered a bread and butter pudding with butter scotch sauce for dessert. The dish was so delicious that it rendered her speechless, which is an almost impossible thing to do, but always very welcome when it happens. She gobbled it down in record speed, scarcely pausing to breathe, before describing it as: “moist, warm… unbelievable.”

Anyone serious about restaurants must visit this place.