Barrafina probably serves the best tapas in London. If somewhere north of Spain does it better, then please inform us in the comments section below and we will be eternally indebted to you.

There is a life, an energy and an exuberance to the dishes at Barrafina that you rarely find in a restaurant, and very rarely across such a breadth of the menu, and so consistently, visit after visit.

Going there for a mid-week dinner, we ordered portobello croquettes, which were piping hot and erupted with flavour at the prod of a fork, the creamy mushroom interior rich and powerful.

Eruptions were a theme of the night: we ordered a stuffed courgette flower – probably the highlight of the whole dinner – which overflowed with goat’s cheese laced with honey at the slice of my knife. The dish was so delicious we ordered two, to prevent warfare breaking out over how to split a courgette flower exactly in half.

The tapas comes thick and fast at Barrafina, and everybody sits perched up on a bar, facing the hustle and bustle of the kitchen, a whir of waiters and cooks, chopping, frying, pouring and serving, all the with energy that characterises a kitchen staff who know they are part of something special. 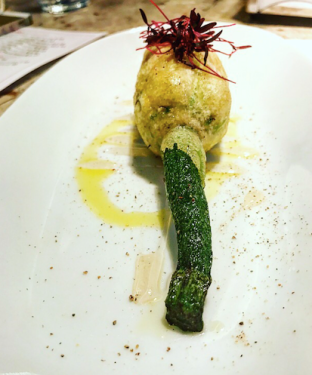 No sooner had we mopped up the last atom of goat’s cheese with a crust of bread, then the next dish was sliding across the bar top towards us. We’d ordered a selection of miniature mushrooms, onions and carrots, soaked in chicken stock, an egg with a stunningly orange yolk heaped across them. This dish was a work of art to behold, but was the only mildly disappointing one we ordered, a slight blandness pervading it. 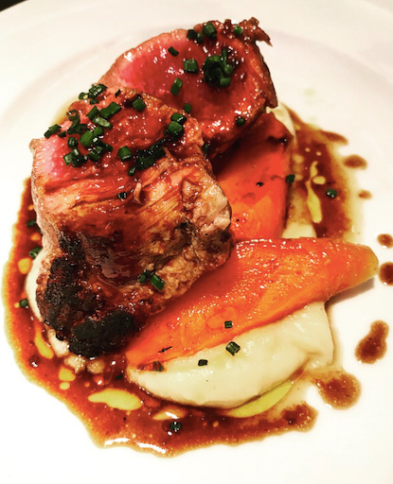 We then tucked into the most filling of our plates, two chunks of iberico pork, sliced from Spanish pigs grown fat on acorns, and placed some swede puree and carrots.

Finally, I broke the habit of a lifetime and ordered a savoury dessert, a selection of Spanish cheeses, insisted on by my partner in culinary crime. She wasn’t wrong.

No review would be complete without an element of complaining, and Barrafina cannot get off the hook entirely. It doesn’t take bookings (which is irritating, but forgivable), but then commits the cardinal sin of not letting you leave the restaurant whilst you wait for your table.

In the age of mobile phones, there is nothing easier in the world than taking a number and releasing a diner to enjoy the distractions of Covent Garden whilst they wait for their table.

But Barrafina does not do this. It insists you stuff yourself against a wall and wait in a line for a table to become available, something we did for over an hour on Wednesday night, becoming more and more filled with a visceral fury at a family of four who finished their meal and then proceeded to sit for a further thirty minutes without a morsel of food or drink passing their lips. Instead, they just chatted, and occasionally glanced at their phones, oblivious to the suffering and hunger of forty people who stared at them with simmering rage.

It was only the amazing food we subsequently had that calmed us down. But if anyone from Barrafina reads this, PLEASE reconsider your waiting policy, and you may just find yourselves on the receiving-end of a complaint-free review.